How to Make a Fur Pom Pom for Cheap

Amigurumi from A to Z

I love a good hat topped with a good pom pom! They are so in style right now, I see them on pretty much every hat in the store. I recently made the Bobble Hat and just really felt like something was missing. I was going to do a yarn pom (which I LOVE as well) but I felt like the yarn I was using was too variegated and I didn’t love how it came out. That’s when I decided to try a fur pom. But those fur pom pom’s can be so expensive. So I figured out how to make a (whole bunch of) fur pom pom for cheap!! And it is super easy! Don’t worry if you aren’t an expert sewer. You don’t need to be!!

So I spent 4.20 on a quarter yard of furry fabric at Walmart. From that I can make about 11 (maybe 12 if I was a smarter cutter the first time!) 6 inch poms. That is about 38 cents a pom pom! You do need a good pair of scissors, thread, needle and some stuffing so let’s say it comes to about 50 cents. Still way better than I have seen in stores.

I also love that I can choose different colors! Like check out this rainbow fur! All the heart eyes, right? I got it from this Etsy shop.

It is pretty easy once you start, but I will share some tricks that I found to be helpful.

Ok, are you ready to make a fur pom pom?

How to Make a Fur Pom Pom

And that’s it! Stock up for all those awesome crochet hat’s you will be making this fall! Like the free crochet Bobble Hat pattern. 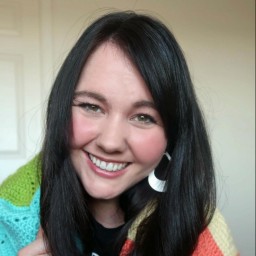